The Digital World (デジタルワールド, Dejitaru Wārudo?) of Digimon World 3, is a world inside the virtual reality game Digimon Online.

This Digital World is divided into five servers, Asuka Server, Amaterasu Server, Izumo Server, Yamato Server, and Ikaruga Server. The servers appear to be all identical, except for different color palettes and city names. The servers are divided into five sectors, the Central, East, West, North, and South sectors, each with a city named after one of the Four Symbols, with the Central Sector city being named after the Server itself.

Asuka Server (アスカ・サーバ, Asuka Sāba?) is the server Junior, Kail, and Teddy are designated to. 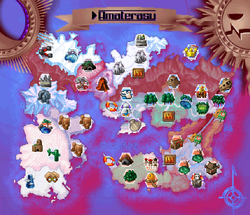 Amaterasu Server (アマテラス・サーバ, Amaterasu Sāba?) has been taken over by the A.o.A. The server has a different, more subdued color scheme of purple and red. It also appears to be damaged in places, with exposed circuitry and chips here and there, but is otherwise the exact same layout as the Asuka Server.

In the PAL version, after defeating Galacticmon, Junior stays in Amaterasu server. However, the Circuit Board and Seabed routes are changed so that the player cannot leave Central and East Sector of Amaterasu Server. Despite that, all wild Digimon encountered before can be found here, including some entirely new wild ones such as Monzaemon. All four city leaders can also be found here.

The Izumo Server is one of the five servers of the Digital World.

The Yamato Server is one of the five servers of the Digital World.

The Ikaruga Server is one of the five servers of the Digital World.

The Data Ocean (データの海, Dēta no Umi?)[1] is the sea that surronds both the Asuka and Amaterasu Servers.

Retrieved from "https://digimon.fandom.com/wiki/Digital_World_(World_3)?oldid=489986"
Community content is available under CC-BY-SA unless otherwise noted.