Controller
Digital Monster Ver.S: Digimon Tamers (デジタルモンスターＳ デジモンテイマーズ, Dejitaru Monsutā Bāshon S: Dejimon Teimāzu?, "Ver.S" short for "Version S") is a video game developed by Bandai in 1998 for the Sega Saturn as a part of the Digimon virtual pet franchise. Its gameplay is similar to that of the virtual pets, but it has higher-resolution graphics and allows the player to raise several Digimon at the same time.

The goal of the game is to raise a Digimon from an egg to a Champion or Ultimate while collecting several coins scattered throughout File Island. However, there are several enemy players, named "Hackers", also trying to get the coins, and they will use their Digimon to attack the player's.

The gameplay is similar to a Digimon Virtual Pet, but up to four Digimon can be raised at the same time and it has some new features such as a shop with multiple foods and items. Each Digimon prefers some food. 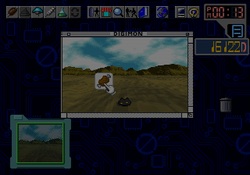 Much like the virtual pet, the interface consists of buttons for feeding, erasing fecal matter, training, and turning out the lights. An in the virtual pet, there is an in-game clock. The player controls a pointer with the d-pad and controls most aspects of game play with it.

Several of the audio clips present on the game disc were reused in later games like Digimon World.

The Protagonist begins with a single Botamon who will quickly evolve to a Koromon. The Digimon has set hours that it is active. During these hours the player can engage in a training mini-game and engage in combat. In the hours in which the Digimon is asleep the lights must be turned off or the player's Digimon may become ill. The Digimon will produce fecal matter once every several hours that must be removed promptly or it may become ill. Finally the Digimon must be fed with food or it will become ill.