The Digimon Sovereigns (四聖獣, Shiseijū?, lit. "Four Holy Beasts"), also known as the "Harmonious Ones" and the "Four Sovereign Digimon", are a group of four Mega-level Holy Beast Digimon that are derived from the Japanese myth of the Four Guardian Spirits of Kyoto, itself derived from the Chinese myth of the Four Symbols. Like the Guardian Spirits, they represent and rule over the cardinal points of the compass — Ebonwumon for the north, Zhuqiaomon for the south, Azulongmon for the east, and Baihumon for the west. They are led by Huanglongmon, who represents and is enshrined in the "Center", from which he supervises the others. In turn, each of the four main Sovereigns has three Deva as subordinates.

Due to Lucemon, Huanglongmon was sealed in the deepest, darkest place within the earth. This caused the Sovereigns to lose their rule and struggle for hegemony, but an equilibrium was established that is still maintained.[3] The Sovereigns have reigned over and protected the Digital World since the age of myth, and have passed into legend as beings which are extremely difficult to track down.[4] They are difficult to overthrow with the power of ordinary Mega Digimon, as their power is set as the highest authority among other Digimon, with strength that is said to be the epitome of gods.[5] Unlike normal Digimon which only have one DigiCore per body, each of the Sovereigns has twelve DigiCores which float outside their body and channel their immortality and tremendous power.[6] Except for Huanglongmon, who has eight, each of the Sovereigns also has four red, shining eyes.[7] 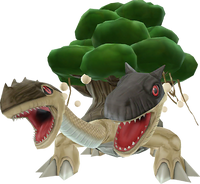 Xuanwumon takes Vikaralamon back to the Digital World after Vikaralamon had travelled to the Human World to the ascertain the threat after a large quantity of devices affected the Digital World. Xuanwumon however considered it to just be a "passing noise" and so travelled to the Human World to retrieve its subordinate. Clash Battle! Sunrise Showdown Sometime later, Xuanwumon helps Meicoomon digivolve to Rasielmon to fight against Raguelmon.

Retrieved from "https://digimon.fandom.com/wiki/Digimon_Sovereigns?oldid=521128"
Community content is available under CC-BY-SA unless otherwise noted.