ESRB: Everyone
PEGI: 3+
CERO: All Ages

Cartridge
Digimon Racing (デジモンレーシング, Dejimon Rēshingu?) is a kart racer developed by Griptonite Games and published by Bandai in 2004 for the Game Boy Advance. It predominantly features Digimon from the first season of the anime as playable racers, though characters from the next few seasons also make an appearance.

A kart racing grand prix is established in the Digital World, a universe where all data takes on a physical form, and home to all Digimon. Utilizing specially designed vehicles that put all contestants on equal terms, this contest will determine which Digimon is the best racer in the land, while allowing all of their special abilities and techniques.

While very similar to a traditional kart racer video game, Digimon Racing utilizes the series' trademark of Digivolving characters into more powerful variations of themselves into gameplay. Each character can digivolve by obtaining a special item, making their abilities much more potent. In addition, several items scattered throughout the various race tracks can help the characters launch offensive attacks against their opponents, hindering their progress.

In all, there are 15 separate courses (12 racing courses, three boss courses), each with their own layout and hazards, including other Digimon. Three separate play modes: Grand Prix, Cup Mode, and Time Trail, are also available. 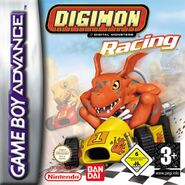 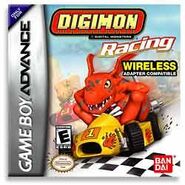