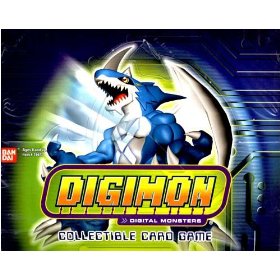 Each player begins with 0 Data Points. The first player to reach 7,500 Data Points wins the game.

To start a game, each players draw 5 cards from their deck, which contains at least 50 cards, and place the remaining cards at the Online Zone.

The players alternate turns until one player wins.

At the start of the turn, the player draws the top two cards from their deck. If there are no cards left, the player must shuffle their Offline pile and then replace their deck with it.

The player may digivolve up to 2 of their Digimon in the Digivolve Row during this phase.

The player also has the capability of playing Digivolve Cards which can override some of the requirements.

If the player has in hand the four Digimon cards which make up a Rookie card's "true" Digivolution, then the player may reveal all four cards and play the Mega Digimon in the Digivolve Row in what is termed "Special Digivolution." The player then gains 500 Data Points, but their turn immediately ends.

The player may move up to 2 Digimon from the Digivolve Row to the Attack Row and vice-versa.

The player who goes first cannot attack on the first turn. Digi-Destined cards may be played during this phase.

The player may then discard and replace up to 3 cards in hand and then ends the turn.

Retrieved from "https://digimon.fandom.com/wiki/Digimon_Collectible_Card_Game?oldid=515555"
Community content is available under CC-BY-SA unless otherwise noted.