View source
watch 03:36
Wiki Targeted (Entertainment)
Do you like this video?
Play Sound

Digimon Board Game (Tagine: Find your Digidestined friends and save Digiworld) refers to the name of a piece of Digimon Merchandise, which is a board game that is based around the Digimon Adventure anime and its characters. The board game was released around the earl 2000 and has a rating of aged 6+ and can be played by 4 players.

Looking on-line, there is some evidence that there actually might be multiple board game that have been released as "Digimon Board game" as there seems to be two different board designs. One board is focused on the early anime when Devimon separated the children by breaking up the island, and the player must battle Devimon. The second board

This is not the only Digimon boardgame that was released as "Digimon Board game" as there seems to be two different board versions found on-line. This version of the board game is set during the Devimon arch of Adventure where File island has been separated and the player must battle him.

The other version with the Tag line "Digimon Board Game: The Ultimate Adventure" seems to be released later and be focused on fighting the Dark Masters and rescuing Kari.

The evil Devimon has separated you from your Digidestined friends by splitting the land into lots of small islands. You must find as many of your friends and their loyal digimon as you can, defeat Devimon and his followers and unite the land once more.

Setting up the DigiWorld

Choose a colour and sit in front of the matching digi-screen on the board. Decide which of the Digidestined you want to play and take that counter in your colour. The only one you can't choose to play is TK, but more than one player may be the same Digidestined character.
Place Ogremon and one black gear counter on Infinity Mountain in the centre of the board. Mix the remaining counters up and make sure they are all picture side down. Put two counters on each empty island leaving three or four islands without counters. Put your chosen digidestined counter face up on one of the empty islands. You are now ready to begin
your big adventure!

How to play
On the board there are bridges between the islands. Starting with the youngest player,
move your counter to any island that is one bridge away from the island you are on

If the score is the same this counts as a win for you as the bad Digimon failed. If your score is lower then you have the fight. Take all the counters from your digi-screen and the island (except the Digidestined friends you started with), mix them up with any counters in Devimon's dustbin. Now put one counter face down or every island, if there are any left over, put a second counter on the island that only have one counter until you have used all the counters up. Do not put a counter on any island that another player digidestined friends on it. Now you will have to find your Digidestined friends again!

To win the game you must drive Devimon for Infinity Mountain, but first you must fight his evil friend Orgremon. You must only approach Infinity Mountain with enough Digidestined friends and food so that you can win the fight Ogemon. When Ogremon has been beateb you can fight Devimon. Only TK and Angemon (who has Digivolved from Tokomon) can defeat Devimon. Tokemon will only Digivolve to Angemon to infinity mountain when Devimon threatens TK (he does not need any food to do this). If you can ge to infinity mountain, beat Ogremon and have TK ans Tokemon with you to defeat Devimon, you have won the game and saved the Digiworld from destruction. 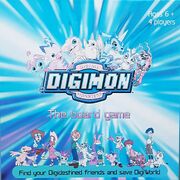 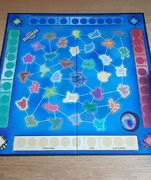 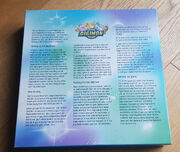 Box back
Community content is available under CC-BY-SA unless otherwise noted.
Advertisement