The plot of Digimon BattleSpirit 2 echoes that of its source series, Digimon Frontier; several children receive messages on their cell phones asking them if they want their lives to change. Some answer yes, some answer no, and five who answer yes are summoned to the Digital World where they receive the ability to become Digimon and fight to end Kerpymon's reign of terror.

The game is one-on-one fighting game, where one Digimon fights another. Unlike most fighting games, the winner is not determined by having the most health but who attains the most "Digisouls", which are released whenever a character strikes their opponent. By repeatedly striking an enemy, the player is able to fill the gauge at the top of the screen, which allows the character to slide evolve. Slide Evolution allows the character to transform into their Beast form during certain attains for increases damage. Yellow diamonds are released during particularly strong attacks, and after attaining five of those, the player can transform into their Ancient form for a powerful, cinematic attack.

During the story mode, the character can face Kerpymon after fighting through all their allies. Kerpymon's battle is different from the rest, as the character must defeat Kerpymon within a time limit. The amount of life Kerpymon has is unseen, though his attacks grow more fierce as he takes more damage. On the other hand, the character begins with eight Digisouls and loses them as they are attacked. Though they can be recovered, if Kerpymon takes the Digisoul, it is lost permanently. Once Kerpymon is defeated, he reverts to a purified Digi-Egg.

Digimon BattleSpirit 2 also contains a minigame titled "Digimon Shoot" (デジモンシュート, Dejimon Shūto?), which simulates a marble game. After choosing a character as a marble, the goal is to knock all of the opponents out of the playing field without being knocked out in turn. 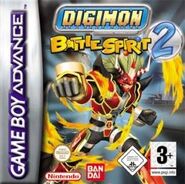