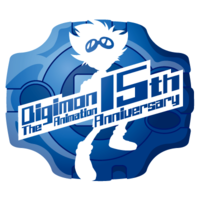 On August 1, 2014, the "Digimon Adventure 15th Anniversary Event" was held at the Odaiba Cinema Mediage. Many figures related to Digimon Adventure spoke and discussed the series, and new merchandise, including Blu-ray releases of all the Digimon movies as well as of the original series itself, was announced. The capstone then became the announcement of a new series, designed to be a sequel to Digimon Adventure starring the original protagonist, Taichi "Tai" Kamiya, now in his high school years.[1] The official site then launched with a surprise: a trailer in English designed for international fans as well.

The site, officially titled the "Digimon Adventure 15th Anniversary Project", featured a Digi-Egg that invited visitors to perform Nade-Nade on it daily. The Nade-Nade action is a rubbing motion in reference to Takeru "T.K." Takaishi and Patamon stumbling into Primary Village and being invited to do the same.[2] At one point, a Sukamon blocked progress and had to be defeated to continue. On September 7, the egg hatched into Botamon and revealed silhouettes of Tai and Agumon, and another Digi-Egg was added. This egg hatched into Punimon on November 8 to reveal silhouettes of all eight original human protagonists. On November 20, three eggs were added, which hatched on December 13 to reveal Poyomon, YukimiBotamon, and Pichimon. Coinciding with this, the official Twitter account tweeted a poster containing the name of the new series, Digimon Adventure tri., as well as the name of three staff members: the director Keitarō Motonaga, Yuuko Kakihara on scripts, and Atsuya Uki for character design.[3] Two more eggs were added on January 7, 2015. They hatched into Yuramon and Nyokimon on March 10, where they revealed that both Butter-Fly and brave heart will reappear as songs, and that all eight voice actors for the original Digimon partners will be reprising their roles. The final egg appeared on April 13 and hatched two days later, revealing Pabumon and announcing that further details, along with the first promotional video, will air on May 6 after a streaming marathon of the Digimon Adventure on Niconico that will begin on May 4. The streams concluded with the first promotional video, which revealed that Digimon Adventure tri. will be released as a six-part theatrical feature, the first of which will be shown on November 21. It also announced the voice actors for the original eight DigiDestined and that the first part's ending theme will be I wish.[4] The main Digimon Adventure tri. site launched with official images on June 12, with the teaser site being moved to a subsite for posterity. At the same time, tickets began to be sold for Digimon Adventure Fes. 2015, to be held on August 1, 2015.