It is followed up by the Untitled Digimon Adventure 02 movie. 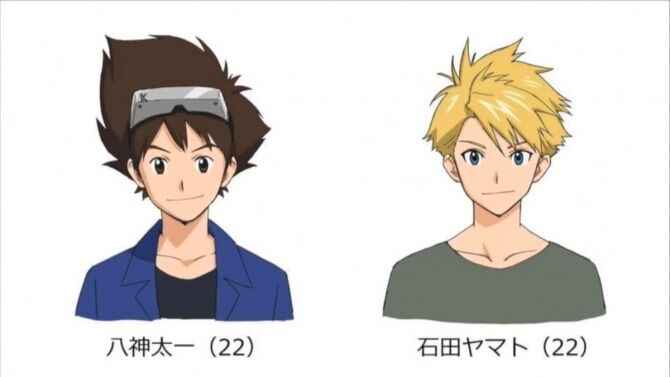 The new film project is part of the overall 20th anniversary celebration of the franchise.

Hiromi Seki, Toei Animation's original producer for the Digimon anime projects, is serving as the supervisor of the new film project. Katsuyoshi Nakatsuru is also returning from the first Digimon anime projects as the new film project's character designer. Kenji Watanabe is designing the Digimon monsters for the new project, as he has done for the previous Digimon projects.[3] In the February 2019 V Jump, released in December 2018, the DigiDestined's designs were shown off.

Bandai announced on March 5, 2019 that the movie would air in Spring 2020.[4] It was also announced the main cast from Digimon Adventure tri. would reprise their roles for the movie.[5]

Last Evolution Kizuna was shown on Japanese theaters starting February 21, 2020. An English-subtitled screening was scheduled for March 25 in the United States[7], but was cancelled due to the COVID-19 pandemic.[8] A dubbed/subbed release was set to release direct-to-video on July 7, 2020[9] but was delayed indefinitely on May 9 due to a production delay.[10] Last Evolution Kizuna will be released in Japan on DVD and Blu-Ray on September 2, 2020, and will include a Drama CD.[11] The dubbed/subbed version will release digitally on September 29, 2020, and on Blu-Ray/DVD on October 6, 2020.[12]

All voices actors are sourced to the the Movie's credits, unless stated otherwise.

All voices actors are sourced to the the Movie's credits, unless stated otherwise.

—Agumon quotes Tai from 15 years ago

Agumon: You know Tai, you sure have gotten big.

—Tai's all grown up.

Kyotaro: I can see why you were mistaken, it's the haircut.

Agumon, Gabumon, Tai, and Matt: This is going to be our, final digivolution!"

—Agumon and Gabumon digivolve for the last time.

Agumon: Hey, Tai?
Gabumon: Hey, Matt?
Agumon: What will you do-
Gabumon: -tomorrow?"