Digimon: The Movie is the first Digimon film to be released in the North American market. Released in October 2000, it is an adaptation of the first three Japanese films, Digimon Adventure, Digimon Adventure: Our War Game!, and the two-part film, Digimon Adventure 02: Digimon Hurricane Landing!!/Transcendent Evolution!! The Golden Digimentals. The three originally-separate movies were rewritten to link them into a single, cohesive plot in order to make them suitable for North American cinema release, which resulted in removing over forty minutes of screentime present in the originals.

The first story focused on Taichi "Tai" Kamiya and Kari Kamiya four years before their adventure in the Digital World. It shows their first encounter with Digimon and what happened to them (as well as the other children) when they participated in their first Digimon battle after raising a quickly growing Koromon.

In the story, a young Kari sees an egg on the computer screen in their house, which turns out to be a Digi-Egg, which later hatched into Botamon. Kari claims that Willis receives his own Digi-Egg at this point. Botamon later digivolves into Koromon and then Agumon, who then goes out and unintentionally destroys a good part of the neighborhood with Kari riding on his back. A second Digi-Egg appears in the sky to reveal an evil Digimon, Parrotmon. Agumon then Digivolves to Greymon but isn't strong enough to beat Parrotmon and is knocked out. Tai grabs Kari's whistle and wakes up Greymon, who defeats the Parrotmon and then they both disappear back to the Digital World.

Koushiro "Izzy" Izumi discovers a virus on the internet infecting a Digi-Egg. At the same time, Tai is trying to apologize to Sora Takenouchi for getting her a hairclip for her birthday in an e-mail. Izzy arrives at Tai's house out of breath, telling Tai about the newly-hatched Digimon. Tai and Izzy use Tai's dad's computer to monitor the Digimon until Gennai appears in a transmission from the Digital World. He sends Agumon and Tentomon to help stop the corrupted Digimon. They put up a good fight until Keramon digivolves to Infermon and defeats them. Tai tries furiously to contact and alert the rest of the DigiDestined and ends up getting only Yamato "Matt" Ishida and his brother Takeru "T.K." Takaishi who are at their grandma's in the country. They find a computer in a barber shop and upload Gabumon and Patamon onto the net.

Infermon Digivolves to Diaboromon after Agumon and Gabumon warp digivolve to WarGreymon and MetalGarurumon but then they slow down because of the massive amount of e-mails being sent to Tai and Izzy, including an apology from Willis and a spam e-mail from Infermon himself. Tai slaps the computer and freezes it leaving WarGreymon frozen and defeated. When Izzy discovers this, he reprimands Tai for it, causing him to confess to what happened with Sora. Diaboromon then starts multiplying and sets up a timer for 10 minutes as he forces the Pentagon to launch two nuclear Intercontinental ballistic missiles: one headed for Colorado, the other for Tai's neighborhood.

WarGreymon wakes up and he and MetalGarurumon race to defeat Diaboromon, only to find over a million copies of him. Every single copy opens fire and blasts them until they lie defeated. Tai and Matt mysteriously enter their computers and talk to their Digimon. WarGreymon and MetalGarurumon DNA digivolve to Omnimon, who easily defeats all but the original Diaboromon. At one minute to go, Diaboromon is still too fast for them to hit, but then Izzy forwards him the e-mails, slowing him like it did to the other Digimon. At the very last second, Omnimon stabs Diaboromon through the head, stopping the timer for the detonator on the ICBMs, and Diaboromon is destroyed. However, the virus tracks down Willis and infects Kokomon.

This part features the characters in the second season and Willis is the main character. T.K. and Kari are in New York City taking a picture but are having trouble then Kari senses something. The attention turns to Willis and Terriermon, who engages in a battle with Endigomon, who keeps telling Willis to "go back," and loses. Willis and Terriermon journey to Colorado while Kari e-mails Davis Motomiya to inform him of Willis. After taking planes and taxis, they end up meeting Willis in a truck while Kari and T.K. literally get derailed by Endigomon, who says "don't interfere," just like Diaboromon. Willis tries to get Davis, Yolei Inoue and Cody Hida a lift on a pizza truck to his house. The ride leaves without Willis and Davis, who encounter Endigomon which leads to a battle between him, Flamedramon and Gargomon, Terriermon's Champion form. Before anyone is defeated, Endigomon disappears, repeating his cryptic message, "go back." Left without a ride, Veemon armor digivolves to Raidramon, and Davis and Willis meet up with Yolei and Cody who told Davis that Kari And T.K. aren't here, much to Davis' disappointment. Willis doubts that they'll come at all if Endigomon interfered.

After the kids question his knowledge about Endigomon, Willis reveals he created him but regrets saying so and storms off, while being followed by Davis. Willis reveals the story about Endigomon, how he became infected and reveals that he was the one who created Diaboromon. Davis offers to help with the rest of the kids and their Digimon. Terriermon overhears the conversation and offers to help. Willis refuses his help out of concern for his safety but Terriermon talks him into letting him. At Willis's home, Endigomon reappears, as expected, but digivolves to Antylamon. He swiftly evades the attacks of Gargomon, Flamedramon, Halsemon and Digmon and throws all the Digimon around like rag dolls. Antylamon sinks into the lake and rises again as Kerpymon (Evil). He then de-digivolves all the Digimon. However, they still try to fight, but to no avail, as Kerpymon grabs them and is about to eat them when Angemon and Angewomon cut off his arms and T.K. and Kari show up.

Kerpymon changes the scenery again and de-ages the DigiDestined, revealing that he wanted Willis to "go back" in time to when the virus attacked him. Angewomon and Angemon digivolve to their Mega forms, Magnadramon and Seraphimon, to release two Golden Digi-Eggs for Willis and Davis. Veemon and Terriermon golden armor digivolve to Magnamon and Rapidmon who get sucked into Kerpymon. Inside they see Endigomon who tells them to destroy the virus. Doing so purifies Kerpymon, who soon dies. After saying goodbye to his new friends, Willis and Terriermon walk back home, and notice the Digi-Egg that will hatch into Conomon, Kokomon's Fresh form. Some time later, Willis relaxes watching the reborn Eendigomon dancing.

Main article: Music from the Motion Picture Digimon: The Movie

After the first two Pokémon films, Fox wanted to replicate its success by producing a theatrical feature for Digimon.[citation needed] Unfortunately, Toei Animation had no feature-length films for Digimon, but instead had animation fairs every spring and summer with featurettes showcasing their current animated titles. The only films produced for Digimon by that time were Digimon Adventure (1999), Our War Game! (2000), and Digimon Hurricane Landing!!/Transcendent Evolution!! The Golden Digimentals (2000), with the first two directed by Mamoru Hosoda and the final by Shigeyasu Yamauchi.

As the three films were twenty, forty, and sixty minutes long, respectively, their footage was condensed to under eighty five minutes. The third film, Digimon Hurricane Landing!!/Transcendent Evolution!! The Golden Digimentals was heavily cut because Saban Entertainment lacked funding to produce a full two-hour movie.[citation needed] Furthermore, "culturally awkward" Japanese elements are removed, and many North American jokes were written into the script.[citation needed]

Jeff Nimoy noted that the first cut of the movie consisted of just the first two films and had plans to release the third film separately as a television movie or direct-to-video, but the idea was overruled.[citation needed] In order to connect the stories of the different movies together, the adapting screenwriters rewrote Our War Game! to include Willis being involved in Diaboromon's creation. Additionally, the subplot of the older DigiDestined being captured by Endigomon was cut out altogether. Originally, Nimoy had Tai narrate the movie, but as Tai did not make an appearance in the third part of the movie, he changed it to Kari instead.[citation needed] The budget of the film production was estimated to be five million dollars.[citation needed] 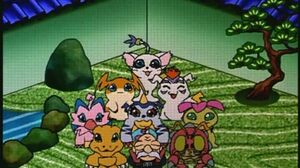