DigimonWiki
Register
Don't have an account?
Sign In
Advertisement
in: Articles with section stubs, Articles with unconfirmed statements, Stub,
and 2 more 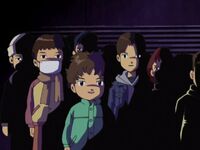 The Dark Spore children is a group of 20 children infected by the Dark Spore. Four of them are Hiroshi Shibata, Keiko Kurata, Noriko Kawada, Takashi Yoshizawa, and other two are named Yukio Sasaki (佐々本 幸男, Sasaki Yukio?) and Hiroko Kakudou (角胴 博子, Kakudou Hiroko?). Duel of the WarGreymon Yukio Sasaki's name might be a reference to the Japanese singer of same name, while Hiroko Kakudou's is a reference to Hiroyuki Kakudo.

The original DigiDestined were a group of kids called to the Digital World before Tai's group. According to Gennai, they were the first ones to defeat and seal away a "great evil" that came from beyond the Wall of Fire. Now Apocalymon The original DigiDestined fought the Dark Masters, and four of their Partner Digimon digivolved into the Harmonious Ones. Loss

Besides Derek, there are five Australian DigiDestined. Their partners include a Bukamon, a Divermon, and two Gizamon.

After the first Control Spire is destroyed, Hogan says that the Australian DigiDestined are leading the Digimon to the remaining Control Spire in the Great Barrier Reef. After Joe Kido, Cody Hida and Derek's partner Digimon defeat Scorpiomon and destroy the remaining Control Spire, Gesomon, Shellmon and Ebidramon are once again being chased but this time by the Australian DigiDestined who have arrived with the Digimon that were loose in Australia. They meet up with Joe, Cody, Derek, and Hogan, and Cody presumably sends the Digimon back to the Digital World. Digimon World Tour, Pt. 2 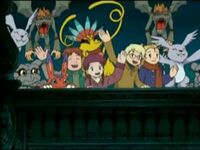 They arrive in a bus with the Digimon that were loose in France shortly after the Control Spire was destroyed. With the date finally being Christmas Day, they greet Catherine, Taichi "Tai" Kamiya, Takeru "T.K." Takaishi and Michel Takaishi "Merry Christmas" which Catherine greets in return. Digimon World Tour, Pt. 2

Besides Rosa, there are three Mexican DigiDestined.

They raise their Digivices to the sky, releasing beams of golden light. A Million Points of Light

Besides, Anna, Sonya, and Yuri, there are three Siberian DigiDestined. In the Japanese version they are only stated to be from "north" without a specific location being given. Each of them has a Frigimon as their Digimon partner.

Sora and Yolei, after helping Anna, Sonya and Yuri, are immediately sent by Ilya to help the Siberian DigiDestined fight off a group of Mammothmon. With help from Imperialdramon who came to bring them back to Japan, the Mammothmon are defeated and sent back to the Digital World. Digimon World Tour, Pt. 3

Nat-chan is a Digimon partnered with someone in the United States of America.