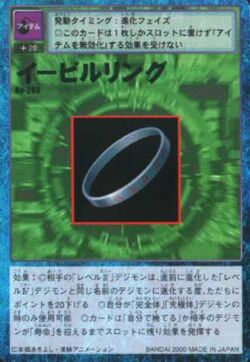 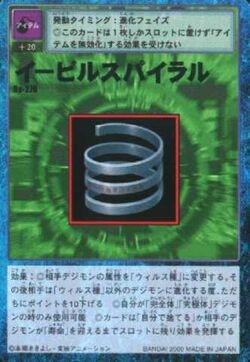 The Dark Ring (イービルリング, Ībiru Ringu?, lit. "Evil Ring") is a dark blue ring of varying size that appears in Digimon Adventure 02. Its design is derived from Gatomon's Holy Ring, and by placing the Dark Ring on a Digimon, the Digimon Emperor can completely control the Digimon's actions. A Dark Ring can only operate when near a working Control Spire, and only works reliably on Digimon at or below the Champion level. Dark Rings are inscribed with DigiCode which reads

The Dark Spiral (イービルスパイラル, Ībiru Supairaru?, lit. "Evil Spiral") is an upgraded version of the Dark Ring, formed by connecting several Dark Rings together into a spiral. It can control Digimon up to the Ultimate level, as well as operate away from Control Spires. Dark Spirals are inscribed with DigiCode which reads

The Digimon Emperor used Dark Rings to subjugate most of the Digital World's population, turning them into his loyal slaves. Combined with the Digivolution-preventing Control Spires, this would allow the Emperor to spread his sovereignty across the Digital World.

Unfortunately, a new generation of DigiDestined emerged to challenge the Emperor's rule, armed with the ability to Armor Digivolve their partners to circumvent the Digivolution lock of the Control Spires. These new heroes eventually realized that the Control Spires were linked to the Dark Rings, and began targeting them to free entire areas of Digimon.

In attempting to stop the DigiDestined, the Digimon Emperor also discovered that his Dark Rings had some limitations of their own. When the heroes reminded Andromon of his past, the Ultimate-level Digimon was able to break free of the Dark Ring's control and destroy the local Control Spire himself. Later, the Emperor's attempt to force a newly-turned Greymon to digivolve to MetalGreymon (Virus) ended in similar disaster; Greymon instead Digivolved to SkullGreymon and went on a rampage.

The latter incident caused the Digimon Emperor to realize that Dark Rings could only successfully control Digimon up to the Champion level. He then created the Dark Spiral, which worked perfectly; using it, he was able make Agumon Digivolve into a virus-type MetalGreymon and control him with ease. Storm Of Friendship The Emperor eventually lost MetalGreymon to the heroes, but his new Dark Spirals allowed him to expand the ranks of his minions to include far stronger Digimon like MegaSeadramon.

Much later on, it is revealed by Myotismon that the design for the Dark Rings and Dark Spirals was based off of Gatomon's tail ring, so in the way SHE "caused digimon to be enslaved." The details of this are unknown.

This section of the article is a stub. You can help by expanding it.
Community content is available under CC-BY-SA unless otherwise noted.
Advertisement