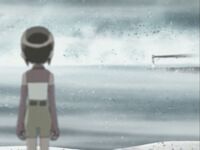 The Dark Ocean (暗黒の海, Ankoku no Umi?), also known as the World of Darkness (闇の世界, Yami no Sekai?)[1] and Quantum Sea (量子の海, Ryōshi no Umi?)[2], is a world in Digimon Adventure 02 and Digimon Adventure tri. that has the power to bring twisted thoughts to life, magnify and corrupt them, and invert the natural order of things. A Million Points of Light It is ruled by Dragomon and plays a central role as one of the world's three main dimensions, along with the Real World and the Digital World. The Control Spires originate from this dimension as well.[please confirm] It's implied that the Dark Whirlpool is connected to this world.[citation needed]

Yukio Oikawa guides Ken Ichijouji to the Dark Ocean after the death of his older brother, Sam Ichijouji. Ken dips his Digivice in the Dark Ocean's water, transforming it into his black D-3 and spurring the creation of the Digimon Emperor persona. Genesis of Evil Kari Kamiya is also pulled into the Dark Ocean due to holding too much inside her. She comes across Scubamon bound by Dark Spirals and frees them once rescued by Takeru "T.K." Takaishi, Patamon, and Gatomon. They only reveal their true forms as dark sea creatures who wish to mate with her so that they can produce powerful offspring to fight the new god (In the English Dub, the creatures want her to become their new Queen who lead them in the battle against the Dark Ocean's ruler). Angewomon drives them off, and they return to the ocean's depths. His Master's Voice

As part of atoning for his actions, Ken joins the others to search for Gatomon's lost Holy Ring, but he, Kari, Yolei, and their Digimon accidentally cross through a Control Spire-caused phase warp and end up in the World of Darkness. He falls into despair and darkness due to the influence of his inner dark self, and Kari follows suit due to her own repressed emotions. Ironically, Yolei Inoue is initially unable to see the Dark Ocean until her frustration at that inability gets the better of her, at which point she snaps them both out of it. The children are returned to the Digital World when Arukenimon creates a Blossomon from the Control Spire generating the warp, allowing Aquilamon and Gatomon to DNA digivolve to Silphymon and defeat the artifical monster. Opposites Attract

It is used as a last ditch effort to defeat Daemon when he proves too strong for the DigiDestined to defeat and destroy, even with their combined might. By combining their powers, they trap Daemon in the Dark Ocean, finally putting an end to the threat he posed to Earth. The Dark Gate

Three years later, after the reboot revived her Tapirmon, Maki Himekawa becomes stranded in the Dark Ocean after her Tapirmon failed to remember her. She had brought a bazooka with her, and uses it to defend herself against the Scubamon. After successfully defending herself, she drifts away in the ocean. Coexistence Future Hackmon warned that Ordinemon's presence in the Real World would eventually cause the Real World to collapse back into the Quantum Sea. Future

Innsmouth (インスマウス, Insumausu?) is a place in the Dark Ocean.