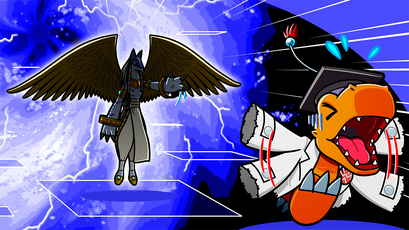 The Dark Area (ダークエリア, Dāku Eria?) is jet-black, abyssal "graveyards of deleted data" full of evil energies[1] It is connected to the Cocytus.

The Digital World is located within a spatial distortion, below the Net Ocean.[2][3][4] How it came to be within the normal Digital World is a mystery whose secrets are known to be held by GranDracmon, although it protects them well.[5] This Dark Area, or more often its guiding ethos, is sometimes known as the "Dark Side" (ダークサイド, Dāku Saido?),[6] and the cunning and evildoing Digimon[7] who have been lured into joining it are said to have been "won over to"[8] or "tainted by" the Dark Side.[9]

First and foremost, the Dark Area is the place to which Digimon are ultimately transmitted when their life span finishes or they are defeated in battle, and is guarded and supervised by Anubismon, who constantly surveys the arriving data; if their data is good, it will reset them back to a Digi-Egg, but if they are evil, it imprisons them within the eternal darkness.[10]

However, the chief nobility of the Dark Area, the Seven Great Demon Lords, are able to subvert this process, as their victims' data is instead sent to the heart of the Dark Area to become their flesh and blood.[11] Furthermore, after the ancient failed rebellion of the Demon Lord, Devil, and Fallen Angel Digimon against the creator of the Digital World, led by Lucemon and Daemon, the evil Digimon were imprisoned in the Dark Area along with many of the other Demon Lord Digimon.[12] A long period of darkness followed this rebellion.[13] Other Angel Digimon who rebel and fall from grace also end up imprisoned within the Dark Area, where they become Demon Lord or Fallen Angel Digimon,[14][15][16] and may be inscribed with the Mark of Evil as proof.[2]

As a result of these two processes, the Dark Area is primarily inhabited by Fallen Angel Digimon and their like,[10] although it also contains Dark-species Digimon who are thought to descend from Vilemon,[17] as well as species who have fled the Digital World proper after being driven near to extinction. Due to the violence of the Dark Area, most of the indigenous Digimon have made brutal adaptations in order to stay alive,[18] although some are merely exceedingly mischievous.[19]

At the very heart of the Dark Area is a den of demonic Digimon,[20] led by the nobility of the Dark Area,[21] and also where several of the Seven Great Demon Lords reside or are sealed.[22] Most of the nobility lead legions of the dark army of demons known as the "Nightmare Soldiers".[23][24] However, the authority of the Seven Great Demon Lords is not absolute throughout the Dark Area, as GranDracmon has kept a castle within it since ancient times, and is powerful enough that it need not submit to them.[5] The Dark Area is also covered by the vast, dark "Evil Forest" (エビルフォレスト, Ebiru Foresuto?).[25]

Despite its purpose as a prison for evil Digimon, the walls are not sound. The messenger of darkness Devimon was able to summon the supremely evil Devidramon to the Digital World from the Dark Area,[26] while the evil Bakemon and Gulfmon were both born from the prison itself.[3][27] Conversely, some Digimon are able to cast their victims into the Dark Area through a "Hell Gate" (地獄の門, Jigoku no Mon?)[28] or "Maw" (口, Kuchi?),[27] and it is said that those who attempt to reach the Golden Land but fail Yatakaramon and Crowmon's "Threefold Trails" are dispatched to the Dark Area as well.[29][30]

Dark Digimon often possess "Dark Side Power" (ダークサイドパワー, Dāku Saido Pawā?) which can exploit the Dark Area's evil "Dark Energy" (ダークエネルギー, Dāku Enerugī?).[31] High purity Dark Side Power allows Digimon like LadyDevimon to reverse the phase of the opponent's own power, incinerating their body and soul and removing any barrier to its virality,[32] while some of the Demon Lords are able to directly channel the Dark Energy in battle as extremely high-temperature blasts.[20] 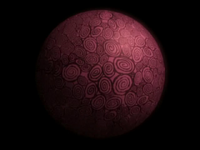 The Dark Area in Digimon Frontier is a location that lies at the center of the Digital World. It is where the primordial chaos and the world's corrupt souls gather, and the tyrant Lucemon was sealed here by the Ten Legendary Warriors after his defeat. The Brothers Yin and Yang It Can't Be! Lucemon Reappears Within the Dark Area, Lucemon plots his revival by tasking his servants—first, a corrupted Cherubimon, and second, the wayward Royal Knights—to gather the world's data for him. Cherubimania It Can't Be! Lucemon Reappears As he attains more and more power, the Dark Area constrains him less and less until he is able to spread his power into the world itself, and with the scanning of the entire world, Lucemon himself is finally freed from his prison. To Make The World Go Away After digivolving to his Chaos Mode, Lucemon heads to the Dark Area and uses its power to form a tunnel to the Human World. The DigiDestined force one final battle here, where Koichi Kimura saves his friends at the cost of his soul, which is scanned by Lucemon. The DigiDestined assume their strongest form, Susanoomon, due to Koichi's sacrifice. The Brothers Yin and Yang Susanoomon defeats Lucemon, bisecting both him and the Dark Area. The Dark Area appears to be purified, but its power is instead drained into the dark half of Lucemon's data, birthing Lucemon Shadowlord Mode, whose "Gehenna" orb is a miniature manifestation of the Dark Area. Lucemon on the Loose

The Dark Area is the Digital World's hell, and once one falls in, they can't come back alive. "Haguro" (羽黒, "Haguro"? lit. "Feather-black") is one of its districts and can be summoned by Crowmon. Anything that touches Haguro's darkness, even attacks, is sucked in to the Dark Area. When Sho and Crowmon confront Tsurugi, GeoGreymon, Ami, and Pichimon in Light City's underground warehouse, Crowmon uses his "Haguro" attack, which is immediately detected by the Andromon's computers. GeoGreymon attempts to attack Crowmon with "Mega Flame", but the attack is sucked by the Haguro's darkness. Eventually, GeoGreymon starts being sucked to the Dark Area. Although GeoGreymon tells Tsurugi to stay away, the boy refuses to let GeoGreymon fall into the Dark Area alone and jumps with him, both being completely sucked by the jet-black abyss. GeoGreymon then digivolves to RizeGreymon and emits a light that breaks Haguro, allowing both to come out. Dark Area!

The Dark Area is a world of darkness that can be accessed through a trolley in the Train Garage. In the Dark Area, time doesn't pass and the Autopilot can't be used.

Leviamon lives in the Dark Area, and a Chaosmon is in the train station.

The Seven Deadly Digimon lived in the Dark Area and after agreeing a pack of non-aggression towards each other grew bored and each created created a Tower. However the Malevolent Fist absorbed the towers and destroyed the Dark Area, causing the Demons to flee to the Dimensional Sea, which then lead them to the Next Order Digital World.

The Dark Area exists on a separate layer to the Digital World, which meant that it was unaffected by the X-Program used by King Drasil in its attempt to kill most of the existing Digimon, due to overpopulation.

The Dark Area was created by GranDracmon, who plans to go to the old Digital World, defeat Digimon, force them to undergo Death-X Evolution, and then send them to the Dark Area.

The Dark Area is where the data of dead Digimon ends up, and is the home of many evil Digimon such as SkullSatamon and DemiDevimon. SkullSatamon is extremely powerful due to having to fight all the time just to survive. Invasion of Darkness! Two Tamers Lost in the Dark

In the past, when a large amount of Digital Points opened up in the Digital World, bringing a large amount of Spiral, the Deva and Four Holy Beasts used the power of the Four Holy Beasts DigiCores to open a distortion to attract all the Spiral into the same place so that they could deal with them all at the same time. Once all the Spiral arrived in the same place, they used the distortion to send them all to the Dark Area which was enough to get rid of all the Sprial for a long period of time. When Spirals once again flood the Digital World Caturamon tries this plan again, though Sinduramon was against the idea as creating such distortions causes harm to the Digital World as the Holy Beasts were no longer around to mitigate the effect the distortion would have on the Worlds. Caturamon enlists the help of Ophanimon of the Three Archangels but they are unable to execute the plan due to Ophanimon not having enough power to mitigate the effects of the distortion. Chasing the Shadow of an Angel! Joining Forces with Sara!

When a Digital Point opens in the Library, it somehow connects to the Dark Area which allows Digimon such as SkullSatamon to travel there. After Sara Shinkai and Takumi Hiiragi realise Machinedramon and Gaiomon wouldn't be able to defeat two Royal Knights, they escape through the gate to the Dark Area. Advent of the Holy Knight! Mark of the Blade

Later, the Royal Knights had heard rumours that GranDracmon had left its castle in the Dark Area and so Jesmon travels there to investigate. This was a trap however as GranDracmon wanted Jesmon out of the way so it could turn the Tamers and partner Digimon into ice sculptures and keep them in its castle for all eternity. Upon Jemon's arrival it is ambushed by many demonic Digimon and Spiral, whilst GranDracmon fights the Tamers in a Digital Point. Jesmon however is able to kill all its enemies and eventually joins the fight against GranDracmon. Mon, Lost in Memories: Impending Darkness

After brainwashing Michi and Angewomon to become its minions, GranDracmon has them fight their friends though it has her retreat when Mon and SaviorHuckmon show up. The group sans Mon and Hackmon, due to GranDracmon summoning a VenomMyotismon to side-track them, chase after her and wind up teleported to the Dark Area in which they are attacked by a group of evil Digimon. The group eventually find Michi and Angewomon, with Angewomon an equal match to Rasenmon due to GranDracmon's power. Sara Shinkai and Machinedramon arrive and are able to talk Michi out of her brainwashing, which causes Angewomon to digivolve to LovleyAngemon after which the the three Megas fight GranDracmon. As they launch a combined attack, GranDracmon finds LovelyAngemon's light beautiful, with the group suddenly teleporting out of the Dark Area. they wake up in the real World, the Digimon all back in their Rookie forms, and confused as to what happened, the group theorize that GranDracmon killed itself by running into the light and celebrate their assumed victory. Illuminating Light A Guide to the Rainbow

Having turned on the others, Sara Shinkai, Tapirmon, Takumi Hiiragi, and Dorumon use portals to the Dark Area to escape from battles they can't win. Advent of the Holy Knight! Mark of the Blade Illuminating Light: A Guide to the Rainbow Takumi and Dorumon also use the portals to send evil Digimon and Spiral to attack the Digital World. To Wield a Blade for Justice