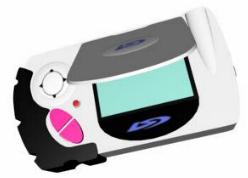 A D-Terminal toy was released during the run of the show, whose main feature was a Digimon Analyzer that provided basic data on 351 Digimon, many of which had not appeared in the anime. The lid of the toy had a decoding chart for the English alphabet of DigiCode, and the toy included a "Digi-Words" application that would translate English text into DigiCode. D-3's and original Digivices could also link to the D-Terminal, allowing the two devices to battle, or letting the D-Terminal look up information on the Digimon contained in the virtual pet. There were also two additional mini-game applications.