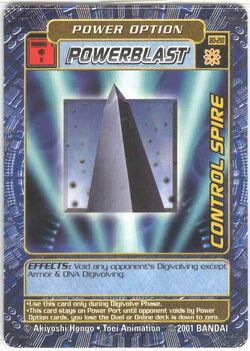 Under the influence of a Dark Spore, Ken Ichijouji became the Digimon Emperor and began building Control Spires across the eastern Digital World. On a map of the Digital World, areas with a Control Spire were represented by black squares. When one was destroyed, the square would turn white. Grey squares were used to represent areas untouched by Control Spires.

The Control Spires originated from the Dark Ocean according to Ken, and at least one of them was shown to exist in Dragomon's domain . His Master's Voice Though the Digimon Emperor's base was shown to be capable of mass producing the spires The Darkness Before Dawn, after Ken renounced his role as the Digimon Emperor he could no longer recall how he created them. The Emperor built the Control Spires in order to prevent natural Digivolution and provide power to the Dark Rings that allow him to enslave most Digimon, so as long as a Control Spire stood in a sector it was effectively under the Emperor's control. Therefore, destroying Control Spires was a critical part of the DigiDestined's strategy. Unbeknownst to him, he had been building the Control Spires under the influence of Arukenimon, Mummymon, and the Myotismon-possessed Yukio Oikawa, as the Control Spires' true purpose was to imprison the Four Harmonious Ones and disrupt the boundary between the Human and Digital World so that Myotismon could return and conquer it. In response, the Four Harmonious Ones created the Digi-Eggs using the Crests as templates in order to bypass the Spire's power, so that their chosen Digimon would have the power to stop the Digimon Emperor.

After Ken Ichijouji gives up his Digimon Emperor persona and stops building Control Spires, they cease to prevent Digivolution, freeing up the DigiDestined to spend time on rebuilding. However, Arukenimon begins reactivating Control Spires as well as transforming them into artificial, soulless Digimon thralls with the power of her "Spirit Needle" in order to obstruct the DigiDestined.

This forces the duo to use a hail mary, fusing one hundred Control Spires into BlackWarGreymon in order to create an adversary powerful enough to defeat the DigiDestined. However, he developed a soul and rebelled against his creators, who he saw as inferior, and begins destroying Digimon, Control Spires, and the Destiny Stones in order to seek fulfillment and meaning.

After the DigiDestined successfully convince BlackWarGreymon to stop destroying the Destiny Stones, they are able to finish off the last of the Control Spires in the Digital World. In response, Arukenimon and Mummymon move to the Real World and begin building Spires there, which opens passages that allow wild Digimon to enter the Real World and rampage. The DigiDestined quickly respond to this plan, journeying across the globe to destroy the Spires and round up the wild Digimon, leaving the duo with their backup Dark Spore plan.

The Dark Tower is a Farm Good.

The Dark Towers are the main feature of the Dark Tower Wasteland and inhibit normal digivolution within its confines. Dark Towers are also targetable enemies in the "Remove Dark Tower" series of quests given by Calumon (NPC) that are required to unlock certain Jogresses.