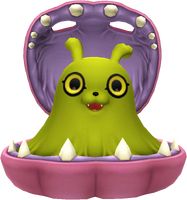 Syakomon is one of Chitose's Partners. It appears as part of Chitose's team in Domination Battles. When Keisuke Amasawa and Chitose explore Under Zero, it has digivolved into a Seadramon. After being awakened from Eden Syndrome, Chitose joins Keisuke Amasawa and Ryuji Mishima in a Domination Battle against Fei Wong Tomoe Ignacio to prove they can protect Eden. During this, Seadramon has digivolved into a Whamon. 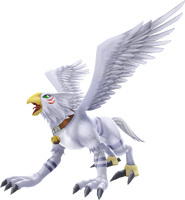 Unimon is one of Chitose's Partners. It appears as part of Chitose's team in Domination Battles. After being awakened from Eden Syndrome, Chitose joins Keisuke Amasawa and Ryuji Mishima in a Domination Battle against Fei Wong Tomoe Ignacio to prove they can protect Eden. During this, Unimon has digivolved into a HippoGryphonmon 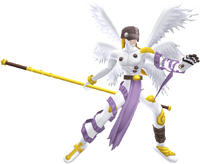 Angemon is one of Chitose's Partners. When Hudie's receptionist, Yuri Kashiwagi - who Chitose has a crush on, quits, with Chitose forcing Keisuke Amasawa track her down, only to find out she had been working as a double agent for another team the entire time. She quit due to feeling bad about spying on them after seeing how much the Hudie members care about their Digimon. She is partnered to an Angemon and attempted to release him back into the wild as she felt bad about treating him as a tool. Before she could though, the leader of her team arrived, not happy about Yuri quitting not only the double agent job at Hudie but also her hacker group. The leader attacks Yuri, though Chitose, Keisuke and Angemon defend her, defeating the leader. Yuri tries to get rid of Angemon but Angemon refuses to leave her. Still feeling bad about how she treated Angemon though, she offered for Chitose to take him as they "fought well together to protect her". Chitose and Angemon accept each other and Chitose is extremely happy to have "gotten his first gift from the woman he is in love with", as well as Yuri agreeing to carry on working as Hudie's receptionist.

When Chitose wakes up from Eden Sydrome, due to Keisuke, Erika and Ankylomon going to the Eater's World after hacking an Eater, Chitose feels sorry for himself that it was Keisuke and Erika who were looking after Eden whilst Ryuji was trying to kill all hacker's with Arcadiamon. To prove he is still strong, he challenges Keisuke to fight though when Ankylomon is one hit away from being defeated, Chitose states that this isn't enough. Angemon appears and DNA Digivovles with Ankylomon to become Shakkoumon. He then yells out at Nokia Shiramine and Omnimon if they like his new partner and they approve. Nokia then challenges them to battle, with Chitose and Keisuke managing to win she then states the two of them are ready to protect the real world, whilst Nokia goes to the Digital World to save it.