Canoweissmon is a Sky Dragon Digimon. It is a Digimon with large wings whose body surface has turned a high-purity white as a result of the flames of its blazing spirit further intensifying. It prefers fair play in both power and speed, and shows a joyful expression as the battle heats up. However, it will not permit injustice or unjust actions, and takes them on in a righteous manner by overcoming them. It is said that if it draws out power that transcends it limits during battle, its whole body glitters with white light, and becomes so bright that it can even be detected by Digital Worlds from other dimensions.[1] 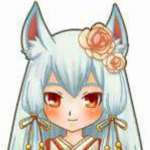