DigimonWiki
Register
Don't have an account?
Sign In
Advertisement
in: Articles with section stubs, Partner Digimon, Characters in Digimon World Re:Digitize,
and 2 more

Black is strengthened by a special procedure, and his power is on another level. Digimon World Re:Digitize Due to Yuuya's privileged account, Black is able to move freely through GIGO's server. Our Routine, Evolving!! He is also able to shoot beams of energy from his mouth. Don't Quit, Advance!!

One day, Yuuya catches a hacker reading GIGO's files, and sends Black after Angewomon and LadyDevimon. The pursuit ends in the Colosseum, and they break the wall when entering it. Our Routine, Evolving!! Black attacks Angewomon and LadyDevimon, but before he can finish off the Angel, he is hit by Digitorin's attack, giving him temporary restrictions. After the hacker's Partners escape, Nyanko Tamer challenges Yuuya, and Black attacks Digitorin, leaving the Bird unconscious, and WarGreymon proceeds to fight him. Black then releases a wave that fatally injures WarGreymon. When Black is about to finish WarGreymon, Taiga begs for him to lend his power, and the Dragon Man has a sudden recovery, then launches an unusually strong "Gaia Force" that damages Black so much that he is forced to retreat. Don't Quit, Advance!!

Black is Yuuya's Partner and is strengthened by a special process, putting his power at a completely different level.

Taiga and Agumon meet Yuuya and Black in the Signpost Forest. Black states he wants to fight someone strong, and Yuuya asks if Taiga wants to fight. They are interrupted as Yuuya senses Vitium's presence and the two chase it. 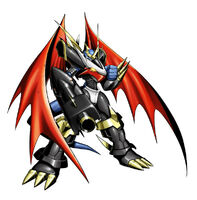 Black will be in this form for the "We are the Strongest" Free Battle. If Taiga defeats Black, he can obtain the Imperial Dragon's Ancient Cannon.