DigimonWiki
Register
Don't have an account?
Sign In
Advertisement
in: Articles with section stubs, Partner Digimon, Characters in Digimon Adventure,
and 3 more

Ballistamon is one of the main characters in the Digimon anime, Digimon Fusion. He is a member of Mikey's Fusion Fighters army.

Ballistamon is a noble and taciturn warrior. Ballistamon has a compartment in his chest that can be used to carry cargo, such as the Squawkers given to the members of the Fusion Fighters army.

Mikey Goes To Another World! He is Shoutmon, Hear Him Roar! A Rival Appears Island Zone in Chaos! Thanks for the DigiCards! Crisis or Conquest Danger Erupts! Meltdown in the Magma Zone! Dorulumon's True Colors The Rival Champions! Ice To See You, Angie! Treasure, Traps, and Trouble - Oh, My! Mikey, Warrior of the Light! Showdown in the Sand Zone Trouble in Paradise A Dark Cloud Over the Sky Zone Clash in the Clouds Welcome to the Jungle Zone! Rumble in the Jungle Zone! Train Of Terror! Disaster in the Dust Zone! Lost in Digital Space

DarkVolumon is the original form of Ballistamon, a stag-beetle type Digimon, who was a member of Olegmon's crew, before he lost his memory after fighting Shoutmon, when he was sent by mistake through a dimensional rift to the Village of Smiles in the Green Zone. 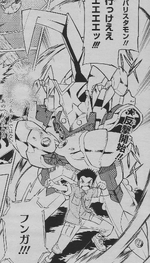 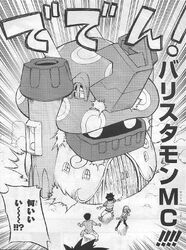 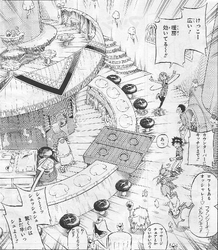 Ballistamon Mush Cottage is the DigiFuse of Ballistamon and the Mushroomons. In this form, it takes the appearance of a cottage complete with a kitchen and dining room, all of which are mushroom-themed. It comes equipped with a "Teppan Soul" griddle, "Mask Freezer" freezer, "Blast Oven" oven, "Armed Conro" stove, and "Face Jukebox" jukebox, the latter which Ballistamon uses to talk.

It houses the Fusion Fighters for the night in Snow Zone, where it, with its Mushroomon chef, feeds the team dinner. Unfortunately, they are ambushed by Tactimon, and the DigiFuse is broken. Xros Girls!! The Mysterious Beauty Nene!!

This form is used again in Corridor Zone after the battle against Tactimon. Xros World!! The Secret of the Two Worlds!? 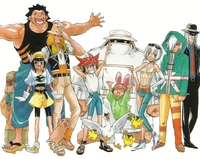