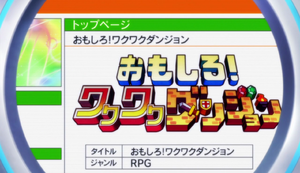 Awesome Excitement Dungeon was a video game released 3 years previous. While it had a very successful launch, the punishing difficulty of its early game caused its popularity to plummet, and its servers shut down after three months. This action left the Ropuremon for the game depressed, especially after the other Ropuremon gave his game as an example of failure. In his depression, he is eventually infected with the L-Virus and turns Tokyo into a giant RPG, eventually recreating the game within an AR-Field centered at Fujimizaka Middle School. Haru Shinkai and Gatchmon use a walkthrough to reach the end, which angers Ropuremon. When Haru tells him that he honestly enjoyed the dungeon crawl, thus praising the game itself, Ropuremon is pacified. The Character I Leveled Up is Naked?! Ropuremon's School Dungeon!