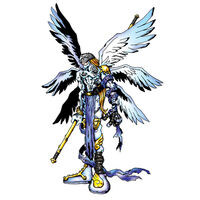 Angemon-species (エンジェモン系, Enjemon-kei?) are Digimon whose names and designs are derived from the mythological angel. Devimon was originally a shining Digimon of this species, but it became a fallen angel when it fell to the Dark Area.[1] Though MarineAngemon possesses the name of "Angemon", as far as the ecosystem is concerned, the Angemon-species is actually a different family.[2]

Retrieved from "https://digimon.fandom.com/wiki/Angemon-species?oldid=503057"
Community content is available under CC-BY-SA unless otherwise noted.