Alphamon is a Royal Knight in Digimon Story: Cyber Sleuth.

Alphamon is able to summon the Ouryuken Sword and use Blade of the Dragon King without having to become Alphamon Ouryuken.

Alphamon, whilst posing as Kyoko Kuremi, is initially bored of her job at the agency, though is excited as soon as clients arrive. After learning the young men had their accounts stolen by members of Demons, she sends Takumi Aiba to Kowloon to acquire said accounts. After completion of the mission, she ponders about who the Demons leader is, and laments that they don't know anything about how EDEN Syndrome works. 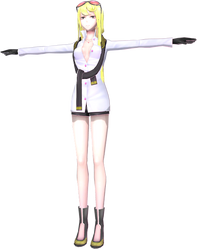 After Kyoko Kuremi had her mental data absorbed by an Eater, Alphamon took over her body to be able to move in the Real World. Posing as Kyoko, Alphamon runs the Kuremi Detective Agency.

When going to Cyberspace EDEN to rescue Aiba, Nokia, and Yuuko, the car merges with Kyoko's body, allowing her to become Alphamon again.