Agumon adores his partner Marcus, and considers himself to be "Marcus's employee" (follower in the original). He even refers to Marcus as his "Boss" ("Aniki" in original, meaning "brother" literally but meaning "boss" according to the Yakuza, therefore having the same connotations).

In the first episode, he is referred to by the code-name of Raptor-1 by DATS.

This Agumon in particular holds true to the given description of a common Agumon being somewhat aggressive.

Being the main Digimon character in the series, Agumon is always the first amongst the partner digimon to reach a new level. Unlike the other partner digimon in Digimon Data Squad, Agumon was easily accepted into Marcus' family when he was discovered, and is even given free reign of the Damon household. Marcus' Inner Strength!

Although Yoshino tells Marcus that Digimon can only eat special Digimon food, Agumon tends to eat practically anything, including Marcus's mother Sarah Damon's fried eggs. Agumon's obsession with eating sometimes results in comical moments when Agumon (or Koromon, in one situation) attempts to eat Marcus's head.

In the final episode, Marcus' DNA gives Agumon a new appearance. An outline of a dragon surrounds him, and he is given fiery bird-like wings and a dragon-like tail. In addition, Marcus can ride him, using straps attached to Agumon's wristbands to control his movements. Whether this is a super charge of Marcus' DNA or a new digivolution stage is unknown, but this form is informally referred to as "Agumon Burst Mode".

Agumon is a playable character in Digimon World Data Squad.

Agumon appears alongside Marcus on the Old Clock Shop Man's boat. A Great Hunter Gathering! The Digimon Contest of the Southern Island! 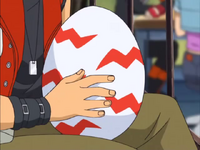 Following his dark digivolution into ShineGreymon Ruin Mode, Agumon lost most of his energy and reverted to a Digi-Egg. The Norstein Family Secret During the battle against Belphemon, the egg hatches into Koromon. The Battle With Belphemon!

During the fight against Belphemon, Koromon's Digi-Egg hatches and he attempts to eat Marcus's head. Although Marcus worries that Koromon doesn't remember him, the baby Digimon reassures Marcus that he does remember, then digivolves to Agumon. The Battle With Belphemon!

Agumon has the ability to achieve Burst Mode as a Rookie, resulting in a new form.

When Marcus and Agumon are taken to the Digimon Fusion universe, they use Agumon's Burst Mode against Quartzmon and his VenomMyotismon puppets. A Great Legendary Hero Gathering! The Digimon All-star Showdown!!

GeoGreymon first appears during Agumon and Marcus's fight against a large Kokatorimon. This is when Marcus activated his DNA for the first time. Marcus was given his Data Link Digivice, and with it, he was able to help Agumon digivolve into GeoGreymon for the first time. After the first battle with Merukimon, GeoGreymon is often replaced by one of his digivolved forms so this form is used less and less in battle.

RizeGreymon first appears during the fight against Garudamon. Marcus's own frustration over the uneasiness of his friends and family caused him to evoke the power GeoGreymon needed to digivolve into RizeGreymon. The Rise of RizeGreymon!

ShineGreymon is first seen during the fight against the Bio-Hybrids. Marcus' DNA super-powered RizeGreymon, causing a silhouette of ShineGreymon to appear around RizeGreymon. ShineGreymon was properly introduced in the next episode, along with MirageGaogamon and Rosemon after the Data Squad team learns how to harness this new power. ShineGreymon is crucial in Belphemon's destruction and Akihiro Kurata's downfall.

ShineGreymon Ruin Mode is said to be the corrupted form of his Burst Mode.

The first time ShineGreymon changed modes, it was into Ruin Mode, a corrupted version of the true Burst Mode. This occurred during ShineGreymon's battle with MirageGaogamon when Marcus' dark emotions, fueled by his belief that his friend Thomas turned on them and joined Kurata, caused ShineGreymon to go through Burst Digivolution. ShineGreymon Ruin Mode went out of control until it regressed back to Koromon's Digi-Egg.

Marcus manages to activate ShineGreymon's true Burst Mode in the battle against Belphemon, this time, ShineGreymon properly transforms into his Burst Mode and easily destroys Belphemon. Marcus activates his D.N.A. again during the DATS team's first encounter with the Royal Knights, allowing ShineGreymon to enter his Burst Mode again. However, this time, he is defeated by Gallantmon. He appeared later on facing the Royal Knight Craniamon in a one on one duel and was losing until the rest of the DATS arrived to jointly defeat the Knight. He last appeared in the final confrontation against King Drasil along with the other DATS Digimon.

In the movie Digimon Savers: Ultimate Power! Activate Burst Mode!!, ShineGreymon Burst Mode is the one who defeats the Mega form of Argomon.